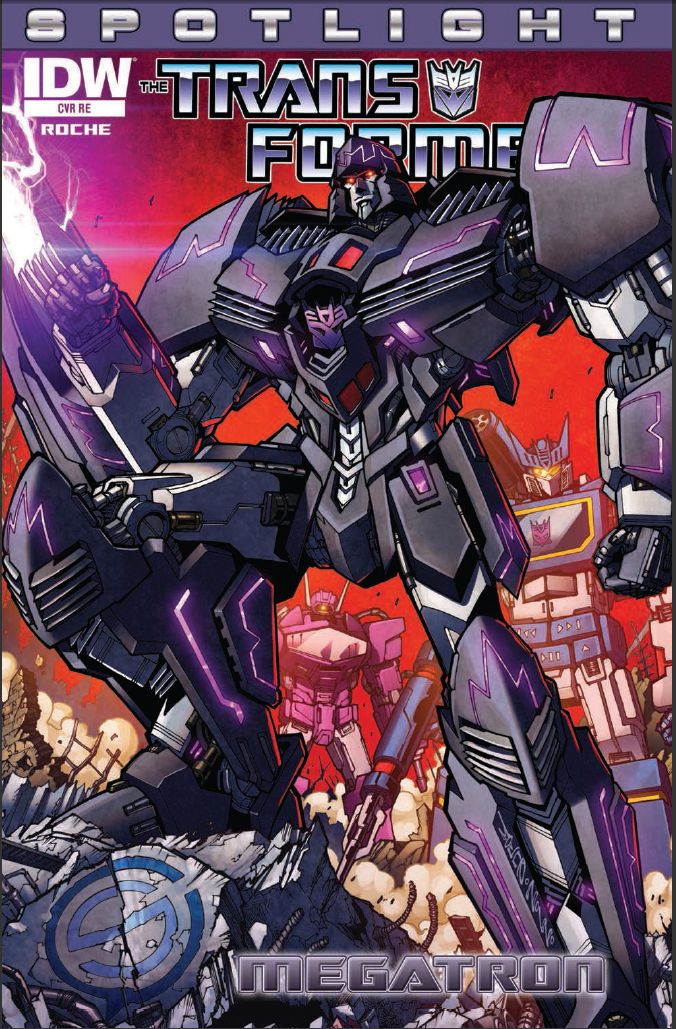 So for whatever reason, I’m deciding to give Transformers another go.

I can vito a title or franchise after starting it if reading just becomes too much of a chore — though I retain the right to make periodic trips back to it just to harp on it a little more.

I did not like Transformers Prime: Rage of the Dinobots.

I thought it was bad in almost every conceivable meaning of the word, but I’m willing to give it another go, and IDW does have many Transformers titles and Transformers timelines to choose from.

Rather than commit to an entire miniseries like before, I’m hoping for a self-contained story — which is why I’m looking at an issue of Transformers Spotlight today.

I have a few issues of Spotlight at my disposal but decided to try Megatron.

I always find villains interesting, and — other than Optimus Prime — he’s the Transformer with the most staying power.

I find Transformers just has too many characters behind it, but when it does manage to zero in it can be good.

I believe it has the capacity to be good, given a narrower focus and a talented writer.

A brief prologue lets us know that the Decepticons have been taken from Megatron by Starscream and that he’s in a new body, which sets the stage for a “finding the strength” type of story by writer/artist Nick Roche.

I like when a writer and artist are one and the same, it can add a lot to the telling of a visual story.

It did wonders for Secret History of the Foot Clan.

And this story is much the same, as Roche produces a truly thought-provoking character study of Megatron and Starscream while simultaneously bringing a new reader into what has been going on in the overall storyline of the series without overcoming them with plot nuances.

The basic plot is this: Megatron has returned after three years of being “dead,” and has now been reformatted and reborn as the Decepticon leader.

In those three years, Starscream has been in command and has reduced the Decepticons to fodder in the meantime. 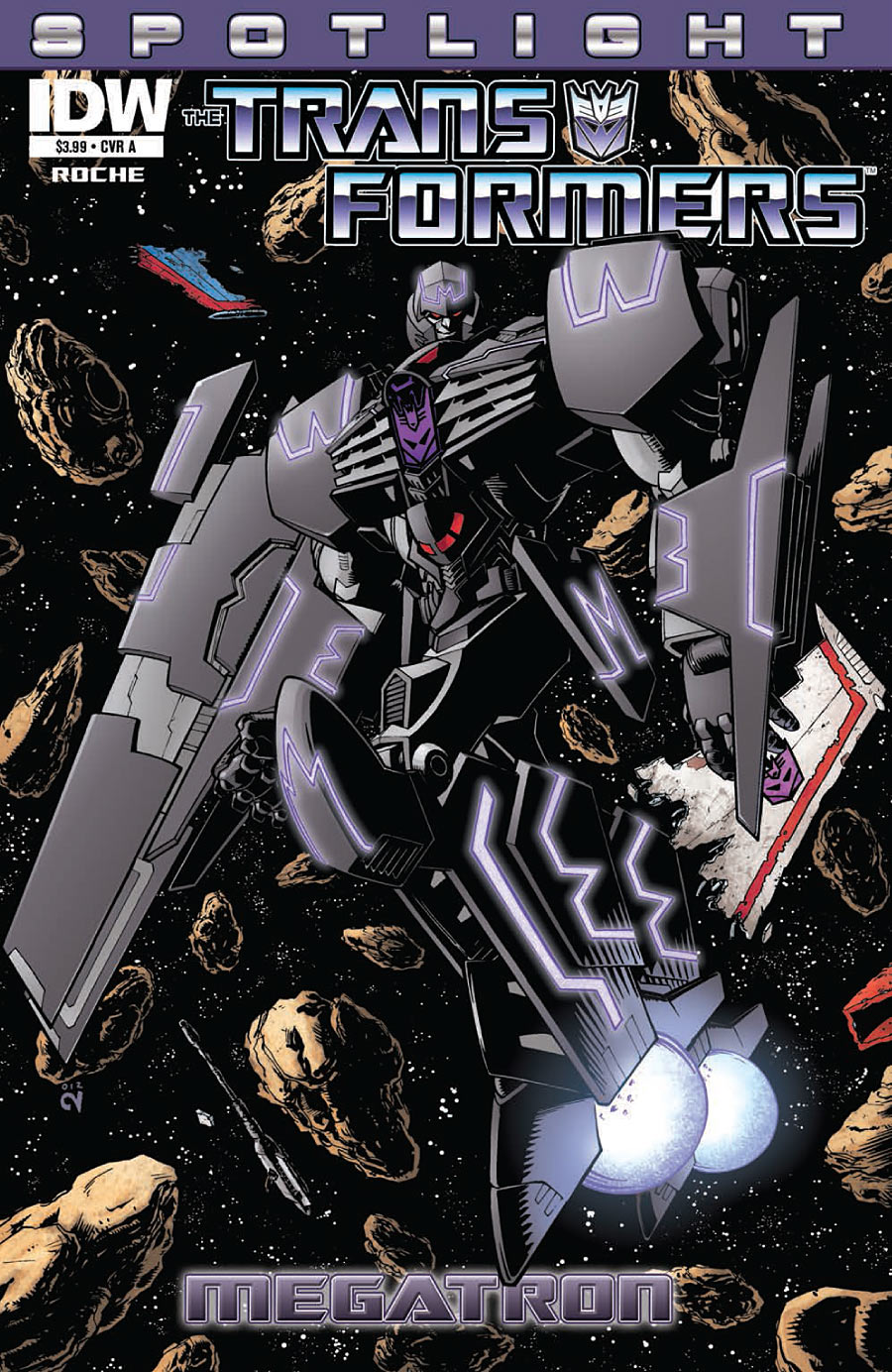 The issue starts with Megatron inspecting what remains of his troops: they’re beaten and bloodied, with one soldier unable to fire his gun because his hands are missing.

His tour ends in his throne room, where Starscream lies huddled and awaiting punishment.

What follows is an issue-long battle between the two, but the battle isn’t the right word.

The words being said are what is important here.

Megatron belittles and berates Starscream as he beats him, but underneath it, all is the intent to light a fire within Starscream again — to make him want to fight when right now all he wants to do is die.

It’s effective and you can see why Megatron is followed, why he is such a great leader.

After this issue I’m almost rooting for him, it is so convincingly from his point of view.

He’s not a sympathetic character, but he is a likable one.

The story is helped by some great dialog and a great internal-monologue by Megatron which helps to paint the world and his characters — Soundwave and Shockwave — in such a way that not only makes the reader understand them but lets us know how Megatron understands them as well, and that’s an important element.

The art is fantastic as well, with the “body language” of a character perfectly matching the dialog — again, a benefit to having the talented writer and the talented artist be once and the same.

The only time the dialog slips a little is when trying to turn English-idioms into things robots would say. 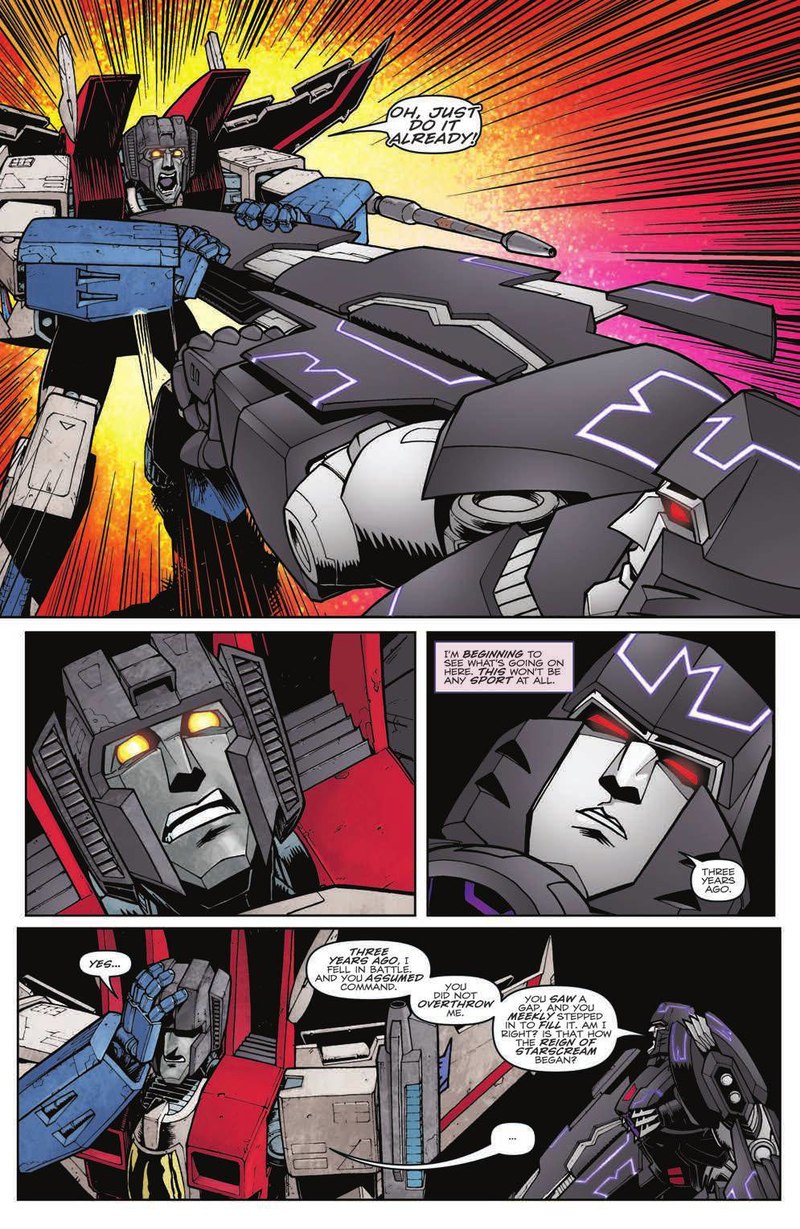 But the other dialog is amazing, especially the closing dialog from Megatron:

“A million years to create them.

A thousand days to destroy them.

A hundred words to rebuild them.

Everything as it should be.”

That’s just a great line, filled with character and truth.

Pick up this comic.

My faith in Transformers has been restored.

Let’s hope they don’t mess it up next time.

“Pick up this comic.

My faith in Transformers has been restored.”